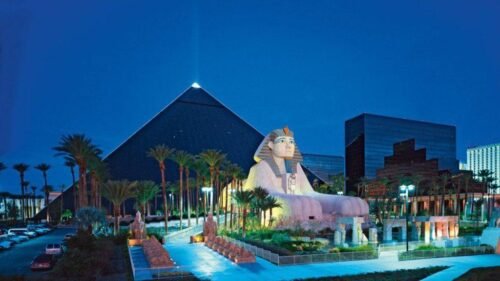 What happens in Vegas doesn’t have to stay in Vegas, especially if child sex trafficking is involved. Flight attendants have lots of stories to tell. They see it all, bad and good. I should know, my mom was one back in the day before I was born. Our witness works for a known airline, but in this case, which airline is not relevant. Her exact words are modified for her protection as to avoid her being identified.

The hotel has a wicked design by default, rooted in the occult. The shady business carried inside only adds to the already imposing negative energy. The boy who couldn’t have been older than five was shaking and visibly afraid. The flight attendant’s instincts told her this child was being trafficked and terrified of the man keeping him company. Not a hard assumption, as human trafficking is blatant in the mafia ridden city. People believe Sin City cleaned up the mobsters, but politicians have always been the biggest mob there is.

The little boy was crying and carrying two boxes of pizza, a signal for pedophiles. A kid carrying a box of pizza stands out in a crowd, making him noticeable by their abusers. This method to alert “buyers” has been exposed by multiple child sex trafficking busts, is used regularly. As the little boy followed the man to their room, our flight attendant snapped an image of the room number. A visibly irate woman came after our flight attendant shouting, as she headed to her room. Feeling threatened, she was forced to scream for help, luckily hotel security arrived soon after. What happens in Vegas, we expose.

As they were trying to calm down our shocked flight attendant, they kept talking among themselves. They assured her: “the kid is fine,” but when she inquired further, their tune changed. All of a sudden, “there was no boy,” and they told her: “she should stop making stuff up.” In an insane turn of events, our witness was arrested and taken for a drive around town. For three hours, she was kidnapped and driven to empty parking lots, where a grim destiny probably awaited her. They insisted she got off the patrol car, but she didn’t comply, fearing for her life. It was the right choice, 100%.

What happens in Vegas, stays in Vegas when the bad seeds take control in politics and law enforcement. During her terrifying experience, her two friends, who were also staying at the shady hotel, got kicked out. They even got barred from the hotel premises for life and fellow hotels belonging to the same chain. Blacklisted, but why? If there was no case and if there was no boy, why the show of force? During her unlawful arrest, her rights were mangled by the police department. Her right to contact the embassy was denied for no reason.

She was under custody for 24+ hours. Nobody told her why, or where she was being held. The charges of “disorderly conduct” were later dropped without any satisfying explanation. Our sweet flight attendant carries the scars of the experience to this day, as she thinks of the small boy often. Her assessment seems to be correct, and the child was indeed in grave danger. She would love to do more, but what can you do when those who are supposed to “protect and serve” are pawns for the mafia?