THE BLACK NOBILITY I 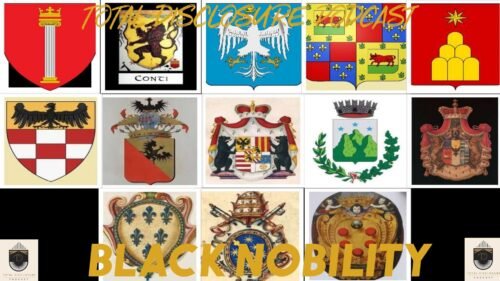 During Ciro Orsini’s Deep Dive and Podcast, I showed you receipts and testimonies. In this chapter, the focus moves towards exposing the Black Nobility. The Papal Bloodlines are the secret, shadow hierarchy of the Jesuit Order controlling the Black Pope. These powerful bloodlines are the Breakspear, Somaglia, Orsini, Farnese, and Aldobrandini. These five dominating families unite with the Borgia, Chigi, Colonna, Conti, Este, Medici, Pallavicini, and Pamphili to form the ancient 13th Saturnalian bloodlines.

The most powerful man right now is the Grey Pope and King of Rome: Pepe Orsini. The Papal Bloodlines of the Jesuits “Black Nobility” are the real families who control the world from behind the scenes. They use religion, finance, property, health, weather, the media, and mind control to yield their power over the masses. The bloodlines often mentioned to be at the top are actually the second level of the human power hierarchy. Yes, the Rothschilds and the Rockefellers control massive amounts of wealth, but whose wealth is far greater than theirs?

It makes sense that some of these bloodlines date back to the height of the Roman Empire and the founding of The Catholic Church. These antique dynasties have moved Kings and Queens from behind the scenes for at least a few millenniums. They have made pawns out of the 99.9% of humanity, and their convenient stealth is ending as myself and others expose them. These bloodlines control all the other secret societies through the Jesuit Order and their Knights of Malta.

Their headquarters in missile protected Borgo Santo Spirito in Rome offer shelter to the trillionaire criminals. Their wealth comes from centuries of exploiting humanity through enslavement and wars. Hailing back from the dark ages, to the middle ages and the crusades! Every single war and gold plundering campaign benefited the ancient thirteen families in some way or the other. Pepe Orsini rules from Rome, Italy, and Henry Breakspear rules from Macau, China. The Windsors of England, the Oranjes of Holland, and the rest of the European royals are pawns.

Maria Camilla Pallavicini is far more powerful than Queen Elizabeth II. The Queen and Prince Philip are subordinate to the Papal Bloodlines and their Jesuit U.K. headquarters at 114th Mount Street in London. A study of who funded Elizabeth I with an astronomical amount of money to fight the Spanish shows it was the Pallavicini bloodline. The most powerful man right now in the pyramid is Pepe Orsini of the Roman Papal Bloodlines. The Orsini clan is also known as the Orso and the ancient Maximus Roman family.

There is no one more powerful than this figure who is known as the Grey Pope. The Papal Bloodlines are the secret shadow hierarchy of the Jesuit Order pulling the strings of the Black Pope. The thirty-first and current Superior General of the Jesuit Order is Venezuelan Arturo Sosa. He was elected by the 36th General Congregation on October 14, 2016. This man controls the White Pope, otherwise known as Jorge Bergoglio. “Pope Francis” is the only pope in existence for the masses, they have no clue.

Both the Black Pope and the White Pope are commoners, used as pawns by the Papal Bloodlines. The Rothschild bloodline married into the ancient thirteen when David Rothschild married Princess Olimpia Aldobrandini. These bloodlines constitute the most powerful families on the planet, and it isn’t even close as far as wealth goes. The Grey Pope pulls the strings, unseen as he controls both wings of the Roman Catholic Church.

These Egyptian Ptolemaic Dynasties are in full control of the Company of Jesus, the High Grey Council of Ten, and anything below. It may be shocking to learn about these families for the very first time, for sure. But that’s because the subservient thirteen families act as pawns and a distraction. The Astor, Bundy, Collins, DuPont, Freeman, Kennedy, Li, Onassis, Reynolds, Rockefeller, Rothschild, Russell, and Van Duyn bloodlines are below. They act as a shield and are the common target of historians and journalists trying to expose them.

The “Black Nobility” are the oligarchic families of Venice and Genoa who held privileged trading rights (monopolies) since the 12th century. These families created multiple fronts to hide their wealth and avoid disclosing the sources for such immense income. Forget about them paying fair taxes, as they are the taxman! “Fondi” is the collective financial interest of a family of the landed aristocracy or a family of the rentier-financier. The Fondi functions as a private bank, or a syndicate of several fondi may combine forces to create a jointly controlled private bank or insurance company.

Chaos is a ladder

The fondi generates income from speculation on gains from the manipulation of commodity prices. It’s all facilitated through monopolies over some portion of the markets. All commodities are exploited for gains, including raw materials and their transportation. Syndicates of fondi increase their power over society by financing the debt of governments. If the syndicate can establish a monopoly of lendable currency, bullion, or credit, they can dictate key government policies. including the appointments of government officials.

Thats how they control policies on tariffs, taxation, public works, land concessions, monopolies, and else. This is what we are witnessing with the International Monetary Fund offering “COVID-19 relief” to struggling nations. The old problem, reaction, solution mantra adopted by Freemasonry and other secret societies. Create the problem and then charge for the solution. With this fake pandemic, they are also trying to break society with the help of a total economic collapse. Or economic reset, if you are part of the club and you know what’s coming. Chaos is a ladder.

The first of three crusades, from 1063 to 1123, established the power of the Venetian Black Nobility. The gold-plundering, land-grabbing campaigns solidified the power of the wealthy ruling class. The Black Nobility achieved complete control over Venice in 1171 when they claimed the Doge’s appointment. It was now up to the Great Council, which consisted of the aristocracy (including the Medici bloodline), to decide. Venice has remained in their hands ever since, but the power and influence of the Black Nobility extends far beyond its borders.

Houses of the unholy

Don’t forget that our modern banking system originated in Italy. In 1204 the oligarchic family parceled out feudal enclaves to their members, and their power build-up grows since. They pressure until the government breaks and owes so much it becomes a corporation. The Black Nobility is the owner of all these flagged corporations or countries. This Saturnalian cartel earned its title through their dirty tricks and love for all things Satanic. When the population revolts against the monopolies in government, the leaders of the uprising was quickly seized and brutally hanged.

Today is not that different, but at least they try to disguise murders as suicides and accidents. The Black Nobility uses secret assassinations, blackmail, bribes, kidnapping, rape, and worst to subdue their “friends” and foes. The house of Orsini currently leads the Vatican kingdom. Who are some of these subservient royal families today? All the families can be traced back to the Windsor (Saxe-Coburg & Gotha) bloodline.

The House of Guelph descends from the Este bloodline, and they rule Italy as one of the original Venice Black Nobilities. The House of Windsor and thus the present Queen of England, Elizabeth II, descends from the House of Guelph. The Guelphs are so intertwined with the German aristocracy through the House of Hanover that it would take several pages to mention all their connections. Almost all European royal houses originate from the Black Nobilities or swore fealty to them for eternity centuries ago.

Having the power to print money is not where the real power lies; controlling natural resources and armies is! Do you think Jeff Bezos, Bill Gates, Warren Buffett, and Carlos Slim (supposedly the wealthiest people in the world) have more wealth than the people who allowed them to amass those fortunes in the first place? It would take Carlos Slim 220 years to spend all his money at a rate of $1 million per day. And yet, the wealth he possesses is only a fraction of the wealth amassed by the Black Nobility. The Rockefellers and the Rothschilds are merely gatekeepers.

Today, the Windsors rule by dominating the raw materials market, and for years they fixed the price of gold. Curiously, a commodity they neither produce nor own. The house of Windsor also controls the price of copper, zinc, lead, and tin. It is no accident that the principal commodity exchanges are in England. Companies run by the Black Nobility include British Petroleum, Oppenheimer, Lonrho, Phibro, and many more. PART II HERE.