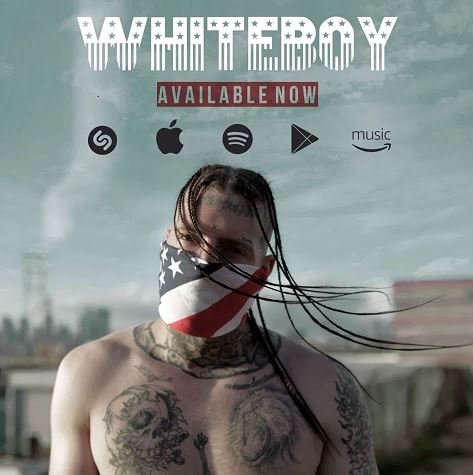 Whiteboy, a great song I found this week for these harsh times of manufactured racial tensions. Granted, this may always be shocking to some. If you are offended by this song, it’s because you indeed hate white people. Tom MacDonald is a Canadian singer, and music producer born in 1988. Currently based in New York, the lyricist has gained tons of attention due to his critical thinking and piercing rhymes. (From his Facebook page):

“More accurately described as a visionary, his artistry isn’t confined to manufactured stereotypes. With his roots lying in Hip Hop, Rock and Roll, and Rap, his cinematic visuals push boundaries, are immediately identifiable, and unlike anything currently on the North American scene. As rap stars have become the new rock stars, there couldn’t be a better time for Tom MacDonald. He has 50,000 active monthly listeners on Spotify, and 500,000 streams. YouTube also caught the wave, and his subscribers are growing at a rate of 300% MOM.

His growing fan-base has been intensely supportive throughout his various music and video releases. Currently living in Los Angeles, Tom was born in Vancouver, Canada, and spent most of his teenage years as a professional wrestler. By the time Tom was 17, he had wrestled across Canada, and in Pay Per View with many WWE Superstars.” Despite his immediate and ongoing success in that world, his passion was for music.

Fuck a Nazi, fuck a white supremacist
Fuck anyone who labels me as that because of my family genetics
The hatred for Caucasians is so fucking pathetic
Go be proud that you’re black, but don’t hate me for some credit

I’m not the white devil, neo-nazi, cop tryna pull the trigger
You can call me what you want but I’d still never say
The white race as a whole ain’t the enemy
There’s racist white people but we’re far from that collectively

If a black man is sippin’ on some Cognac sitting next to me
I don’t assume that every black’s favorite drink is Hennessy
I don’t dislike Tanesha ’cause her first name isn’t Stephanie
Not only is that wrong, it’s a fucking waste of energy

Ivory or ebony, forty-five or seventeen, we all bleed the same
Martin Luther King or Kennedy
They’re angry I’m reciting the facts
He white and he raps and stole the culture right from the blacks

So fuck this corny little honky, man, the whitey is wack
You letting history perpetuate the hatred within’
And then you paint me with the brush
You painted slave owners with, yeah!

I got a mother, a father, a sister, an auntie and uncle
And a grandma that I picture when you’re openly hating
And god willing one day, I’ll have a kid of my own
I refuse to let you blindly hate my wife or my baby

So go ahead and hate the racists, I pray for their extinction
If you wanna hate the white people, just make a distinction
Between the ones who want the best for everyone regardless

And the ones who built the system just to smother you with hardship
Stop before you say it, I know what you been thinking
Hows a straight white male in 2018 bitching

You’re making me the villain by demonizing my race
For things, I didn’t do and decisions I didn’t make
No one that I call a friend has ever owned a slave
And neither did our dad’s, or our dad’s dads, for fuck sakes

Call them lesser than myself ’cause of the race that he’s mixed with
White people that you hate aren’t your neighbors or lawyers
They’re the Rockefellers, Rothschilds, bushes, and royals

They’re the people who monopolize the water and oil
And injected your communities with drugs ’til they spoil
Got no patience for Nazis, I think they’re better off dead
They’re fighting hatred with hatred makin’ the hate more intense

Children you ain’t shit cause they said so
Hate the ones who think you’re all the same and judge you profusely
‘Cause the way that you’re portrayed on our news and in movies
Being white and being racist aren’t the same man, I promise
Know it’s hard to tell the difference if I’m just being honest
I deserve the chance to show you I’m not part of the problem
And you owe it to yourselves, we got so much in common