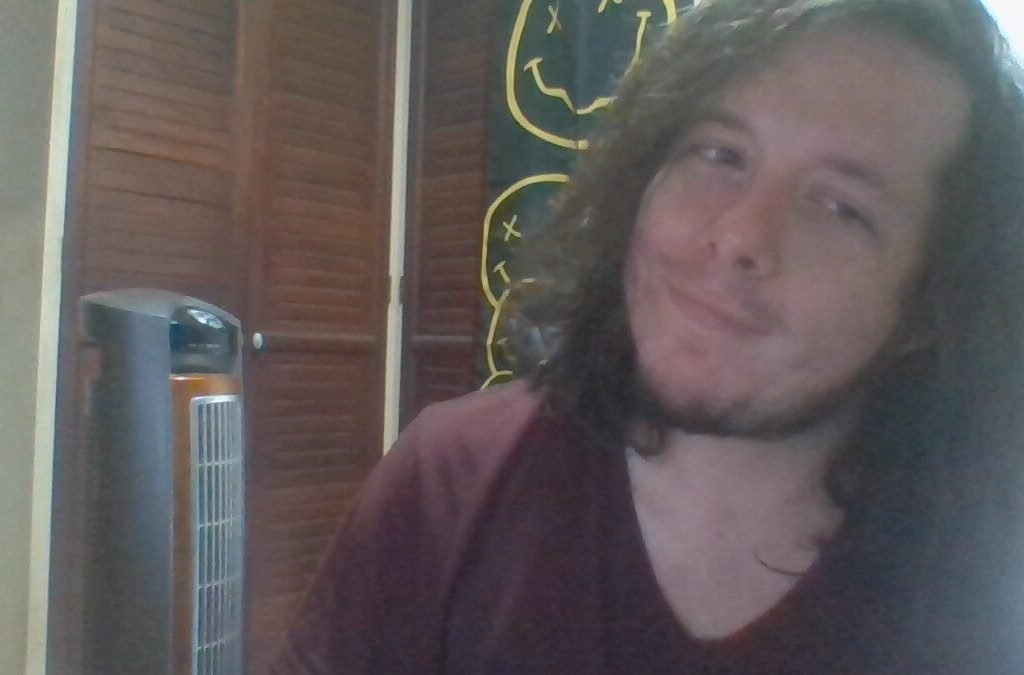 FREE Podcast available HERE. Some of you know me as the “Total Disclosure guy”, or “the dude making a film about Chris and Chester.” Yeah, that’s me – My name is Alessandro. I’m a musician, but I always worked in office settings as the music industry is nonexistent in my country. During the previous fourteen years, I worked in the online gaming industry in risk and project management mostly. I’m a typical functional college dropout and started making good money too fast, too soon. Before working with the ITNJ and learning about child sex trafficking, I had a pretty different life.

I dabbled in careers like psychology, computer science, and forensic science; but never finished. I figured I was making three times the minimum wage, so why waste time in books and classes? A shortsighted view now, I know, is not easy to prosper like that. I was DJing, singing in a rock band, and working up to sixty hours per week to be able to sustain my lifestyle. A lifestyle I no longer desired as I was feeling increasingly empty and shallow. Confused and derailed, I realized that wasn’t me, not anymore.

Of course, that realization admitting changes were necessary wasn’t easy. I suffered a great deal as I was trying to figure out who I was and why things went wrong. I dissolved the band and struggled to change my so-called persona. It took me at least a couple of years to feel comfortable in my own skin again. I hate the office grind, so I tried rebranding myself as a freelance content writer. I just wanted to exploit my creativity and forget about numbers and rules.

I have shared my past PLENTY, on purpose. Figures, if I come out clean on my own, trolls won’t be able to use it against me. Growing up among rock bands and the art scene in general, it’s no surprise I got wild. I lived on the edge of the razor during all my youth. Pop culture taught me that the more rebellious I got, the more chances I had of having that break. By the time I was seventeen, I had tried almost every drug there is. “The road of excess leads to the palace of wisdom” used to be my motto.

A beast of habit, I don’t exactly know what forced me to change. I guess it was a combination of things, but six months before turning twenty-seven, I just quit. Lost interest in all things shallow and deprogrammed from cultural manipulation. I remember being surrounded by many “friends” and feeling lonelier than ever. The pop culture charm I adopted as my banner wasn’t cutting it anymore. I didn’t even like myself. When the music’s over, all you got left is loneliness and addiction – Sorrow, shame, and heartbreak.

In my case? Yeah, I was all about sex, drugs, and rock-n-roll, until I wasn’t. Do I miss music? Sure, sometimes. Music is ingrained in my DNA, and without it, my soul does suffer the toll of silence. That’s how I expressed my feelings while disguising them as social protest or some random subject I was inspired by. The rock-n-roll lifestyle destroys you from the inside fairly quickly, and father time never forgives. Not unless you take adrenochrome, of course. There weren’t many things I wasn’t willing to do to “make it” ten years ago. Luckily, I didn’t have the chance to stoop lower..

The path to mental peace after such revelations is not exactly a walk in the park. The purification process, the decoding, the letting go of deeply ingrained behavior; it fucked me up. I had to burn down every illusion I attached to myself and others. I had to take an honest look at myself and everything I did to others. All the conditioning and fixed ideas in my head were gone. When we can find the truth in ourselves, then we can see through all the external bullshit that is happening around us.

All the bullshit is useless: baiting, deceiving, keeping us in a deep sleep. Many of us, manipulated into accepting heavy karmic contracts. Their goal is to ultimately make you lose track and keep you overfed with whatever vice you accept. The dark entities know who we are, where we come from. We are tracked and tagged, and now they want us sworn and broken. They don’t want us to awaken to our power. We are a threat to everything they have been trying to create here. They use your illusions.

The truth of the matter is whatever doesn’t kill us makes us stronger and, no matter how cliche it sounds, is true. All of you who’ve suffered nefarious experiences growing up have two choices. Let it beat you to death or beat it and help others. I chose the latter, and so should most; is never too late, and it always gets better. I didn’t have any experience volunteering, much less involving myself in activism. Naturally, I was also pretty naive about who to trust and else, as any newbie.

I follow citizen journalism since 2005, and I’ve always been pretty red-pilled. 911 being an inside job became apparent to me pretty early on, and I hate the Bushes anyway. I became more interested in learning about the New World Order and other conspiracies. I wasn’t happy to learn about these crimes but didn’t feel the urgency to do something about it. At the time, I wasn’t aware of Satanic Ritual Abuse or human trafficking. Not until the murders of Chris Cornell and Chester Bennington.

I tried to cope and make sense of his “decision,” but it just never made sense to me. When Chester died in very similar circumstances, I started digging and found all the human trafficking connections now known worldwide. The Jeffrey Epstein case that blew open in July 2019 is just the tip of the iceberg, that’s a fact. The Mossad asset died (or escaped), and others took his place as kingpins of the sex trafficking blackmail rings. Same game, same goal, different players. I wasn’t planning on getting involved, not directly, much less full time.

In early June of 2018, the murders of Anthony Bourdain, Kate Spade, and Inés Zorreguieta happened in successive five days. They were all found hanging from doorknobs, Kate and Inés by red scarfs – I said ENOUGH! My name is Alessandro, and I was a volunteer with the ITNJ in 2008. I felt disenfranchised after Fiona Barnett, an Australian SRA survivor, was sabotaged by the organization. I quit shortly after and was with them for almost four months, but that was enough for me to “notice things.” The ITNJ is not a place from where you can achieve any feasible, honest, clean change.

My first days with the ITNJ were average, nothing overly suspicious. I signed up with the “International Tribunal of Natural (in)Justice” in June 2018, after Bourdain‘s death. I wanted to learn about human trafficking and help the cause any way I could. Sacha Stone and Robert David Steele caught my eye during their famous seatings in which Dutch banker Ronald Bernard gave his chilling testimony. After a couple of meetings with Connie Broussard, I was enrolled and advised to report to Sacha himself.

Since I was already working as a freelance community manager for different companies, that’s the role I got at the ITNJ. I was in charge of social media for the ITNJ, not the other branches like New Earth and Humanitad. I was actually happy in avoiding any involvement in the more “new-agey” aspects of the whole scam. Things went on smoothly at first, but then I felt censored from posting about some perpetrators and cases. They tried to get me to adhere to some protocols that I flat out ignored, in the sense I didn’t take them seriously.

By then, I was a bit fed up and didn’t care if they let me go, but they didn’t, contrary to what Sacha says today to save face. The issues with some “volunteers” and within the tribunal itself were evident to me. The mess with Fiona’s testimony threw me off, and I didn’t understand why there was confusion on how to handle things. All of a sudden, they appointed me as Sacha’s assistant for his personal blog. It seemed the harder I pushed to expose elite human traffickers, the more they wanted to drift my attention to other tasks. Where maybe I wasn’t a threat to the criminals the ITNJ serves and protects.

Soon enough, I witnessed things that sketched me out, and I started drafting my project. “The Superunknown Project” quickly became “Louder Than Love” – A documentary exposing child sex trafficking and the murder of Chris Cornell. It was a matter of contributing no matter what, so if these people weren’t in it for real, I was going to create my own thing. I quit the organization towards the fourth week of September and immediately moved on. I’m not vengeful and didn’t have intentions of exposing them, or whatever you want to call it.

I published the film’s page that same month, and around February 2019, I opened a discussion group “Total Disclosure.” That was the official start of this website, as a hundred people Facebook group. Some months later, I was approached by some of the group’s members to start a podcast and a Patreon. Doing this full time wasn’t in my plans, it was all about the film, but I realized I could expose more filth. I had a new purpose and a reason to fight back in every sense of the word.

I came out as a whistleblower against the ITNJ in August 2019 during an interview with Sarah Westall. My desire for anonymity got trumped anyway when Antonia Vassiliades doxed me. Also, I felt the right way to do this is by showing my face, especially when coming out to denounce the ITNJ. When I learned what Sacha Stone and cronies did to Kevin Annett and Katherine Horton, it was a no-brainer. Add that to the testimonies folks sent me who were wronged by Sacha Stone. I had to do something. Sadly YouTube banned Sarah and our interviews.