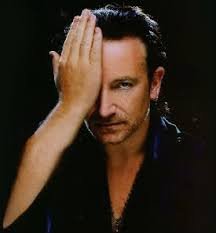 I’d like to know where Bono (U2’s singer and awarded with the Most Excellent Order of the British Empire) was on the night of July 19th, 2017. I have reasons to believe he was at Chester Bennington’s residence, in Palos Altos Estate, California.

Mr. Hewson is a man at the service for the Cabal and has been for a LONG while. The band itself is mediocre, not groundbreaking by any means (I like a couple of songs). They’ve been pushed by the DAVID GEFFEN machine for ages, why? He paid his dues, look at his close friends, VERY shady people indeed.

An old sword for the Cabal

These people photographed with Bono are all part of ”the Club” and are associated with pedophilia and human trafficking rings. A lot of these people were a fix at Jeffrey Epstein’s island and the NXIVM events.

We know FOR A FACT Bono befriended Chester Bennington, in this clip, Chester is interviewed by The Rock FM from New Zealand (Recorded around January 31st, 2011). He explains how Bono introduced him to Oprah as they spent a night drinking. Oprah and Bono? Strange couple.

Two open beers of an European brand were found at the crime scene. Renowned medium Sloan Bella told us Chester was not alone the night he died and that foul play was involved. Give her a chance… She has a great accuracy record, even police have used her skills.

Neighbors reported a black van parked outside Chester’s residence during the aftermath. According to Sloan, Bono was the man in charge of doing the did; aided by someone else. We also know Mike Shinoda is the driver who reported the even as the maid was crying hysterically. Why would he lie and not tell the authorities it was him? A voice comparison side by side helped us reach this conclusion.

Few people know but Bono is a skilled man who has worked for ”the Club” doing more than scamsvia NGOs. He also visited INXS’s Michael Hutchence the night that he died. Michael had a broken hand, odd ocurrence in suicides. Why would he break his hand before hanging himself? Who wanted Michael dead?

Bono was a common friend of Michael and his nemesis, Bob Geldof. When Michael died Bob was granted Lily Tiger’s custody, Michael’s daughter. I really don’t know who thought that was a good idea or why. Did you know Bob is a high ranked member of the Ordo Templi Orientis secret society?

One of the last hits of U2, ”Vertigo”, opens with the words ”Uno, dos, tres… Catorce!”. Means 1, 2, 3… 14, in Spanish. The rumors of Chester being John Podesta’s illegitimate son is one of the narratives our detractors attack the most because there’s no evidence. Don’t you think these two images are interesting to say the least? Was that a nod to Bono for a deed well done (or the green light to carry on with the hit?)

Bono is on the watch list and his turn to be exposed is around the corner. After we take care of his boss, David Geffen, of course.