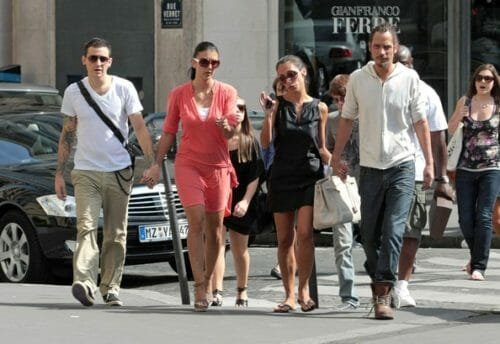 These are the definitive 10 reasons why. Some of my fellow Chris/Chester fans claim it was just the wives who did them in, or just Vicky and Talinda went along with it. I have seen some people claim their murders HAD NOTHING to do with the Silent Children, human trafficking, and pedophilia (Some people are even saying I put out that narrative to make money, cause “Pizzagate is profitable”). Let’s list 10 reasons why that’s not the case:

1. Let’s start with Vicky herself and her involvement as the madame of Instagram models (yacht girls). She is rumored to be partners with Diana Jenkins and Courtney Love (and now her mother Toni, who just set up a yachting company in Greece). The fact Vicky is involved in trafficking herself makes me think she has links with the people Chris was exposing. Every single ELITE HUMAN TRAFFICKING RING IS CONNECTED; you have to be allowed to get in and take a slice.

It’s not something that you just do “solo”. You see how entrenched this is when every single trafficking ring has the same people involved by one or two degrees of separation. The Epstein ring (MEGA Group – The Bronfmanns – NXIVM), the Clinton ring (James Alefantis, the Podestas, “Pizzagate”), and the Hollywood cartel (MEGA Group – CIA George Clooney, Diana Jenkins, Ciro Orsini, etc).

No such thing as coincidences…

2. Both bodyguards and perhaps participants (Martin Kirsten and Ed Majcina) have their own military contractor operation where they work as mercenaries. They have links to Mossad whether they served in the special forces or are simply connected to many of Jeffrey Epstein’s clients. The number of Epstein’s clients who were close to Chris and Chester is astounding.

3. Vicky has always been a nobody, with what influence and money is she going to convince people like Eric Esrailian (Geffen UCLA – MGM Grand), Charles Weaver (Detroit PD) & Theodore Brown (Coroner) to look the other way? EVERYTHING POINTS TO A MASSIVE COVERUP. Eric Esrailian makes almost $2 million a year working at the Geffen-UCLA school of medicine. Let’s put it this way, if you were Chris’s longtime doctor (as Eric was) you’d know Vicky is bad news and if you are a clever businessman (which he is), you’d realize Chris is worth more alive to you than dead.

Unless of course, your billionaire employer thinks otherwise. How many people would sell out someone like Chris over the widow’s greed? 4. It’s not like Eric Esrailian is hurting for money. You need three things to pull this: SERIOUS MONEY, IMPORTANT CONTACTS, AND HUGE INFLUENCE. Thinks such as:

5. The Detroit Police Department wasn’t the only one turning a blind eye, Palos Verdes Altos police also failed to investigate properly. It’s hard to imagine two elite police precincts botching these two similar crimes just because. Plus the testimony I have of a former LAPD Sargeant confirms my theory.

6. Why would celebrities like Brad Pitt, Josh Brolin, Perry Farrell, Gavin Rossdale, Christian Bale, Eddie Vedder, Dave Grohl; all the Soundgarden, Audioslave, and Linkin Park members not question things? It’s not like we are much smarter than them. They wouldn’t fear Vicky, but David Geffen?

Vicky was, is and forever will be a nobody with no talent and no work ethics; Brad Pitt is worth 10 times whatever she is. All these people connected to Jeffrey Epstein and David Geffen: Lawyers, producers, actors, musicians… Epstein was a patsy, the coverup was to protect his clients and handlers, not him.

7. Why would Vicky and Talinda be rewarded as “United Nations addiction ambassadors” and why would Vicky get a prominent position at the NYSPCC if everyone knows Vicky is terrible at managing charity money? I mean, that’s public record. Was it just for pity? It sounds more like a reward from the elites for helping them silence their biggest threat.

8. Chris Cornell and Chester Bennington were the biggest threats for these elite traffickers. One thing is someone like me accusing these people, one thing is eight girls denouncing Jeffrey Epstein so the FBI (with help of the media) can shut it down. Imagine these men coming out TOGETHER denouncing these people with an explosive film!

I am a nobody, I need to build and prove my credibility, Epstein’s victims needed to do so as well. Chris and Chester didn’t need to do anything, they were the best at what they did for decades! Their credibility was huge! Their word alone would have caused massive outroar against the perps.

9. I recall Chris bashing billionaires saying “in all these years none of these billionaires were really friends of mine, they don’t give a shit about you or me”. He wasn’t talking about Vicky, she ain’t no billionaire! 10. Chris was nervous and angry during his last shows (evident due to his rants) but his rage never seemed to be fully directed at Vicky. It was someone else dogging him, threatening him; having people watch him, follow him. Why was Chester so nice to Vicky after Chris died? Even Chester wasn’t able to put it on her! It wasn’t obvious for any of us at first. Chester knew why this happened, David Geffen.