WHAT IF Q IS A PSYOP? 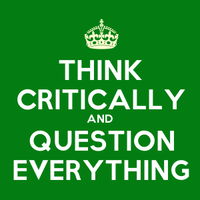 The “Trust the Plan” bullshit to discourage others from questioning things needs to stop. What if Q is a psyop? That behavior is part of the cultist spectrum that is fanatic or blinded by desperate hope. You see, the red pill doesn’t end or begin with Q, this movement was supposed to be a vehicle to gather information and red pill others. And it has, but others have taken it to unhealthy extremes.

Q itself said QUESTION EVERYTHING. But some humiliate those who ask VALID questions which is indeed childish, contradictory, and very dangerous. If Q ends up being the cruelest psyop of all times WE ARE FUCKED. I want it to be real, but I think is time some of you start preparing for plan B, otherwise, BLOOD WILL BE ON YOUR HANDS TOO. You and your children will suffer the consequences as well.

Replies like “trust the plan”, “don’t you follow Q?”, “Trump is the chosen one”, “God chose Trump”, “it’s obvious you are shill”, “you obviously don’t believe in God because you don’t trust the plan” are asinine. So, apparently for some people Q/Trump are gods too. Nefarious. These phrases have been thrown at me more than once! Like many, I’ve been following for almost 3 years now.

The clock is ticking out…

There is no doubt I like Trump and like most of what he has done but I’m worried about some things that seem to contradict “the plan”. I know “disinformation is necessary” but you can’t blame people for getting frustrated. We need action. Are you telling me that even with what was found on Anthony Wiener’s laptop and all the rest of her multiple crimes there is no basis to arrest the Clintons? GIMME A BREAK. They couldn’t even arrest Kevin Spacey.

I said “fuck the DNC” around 2010 and I became a full-blown Ron Paul supporter (we all know what happened there). Total illegal shadowbanning of the best candidate for the 2012 election, Romney got selected to lose vs Obama. A concerted fraud. As a freedom-loving man, I was crushed. Evidently, “renegade” is the worst president the United States has ever produced and I say produced as in Manchurian candidate.

I agreed to give this administration time until May 1st (worker’s day) to act and act bravely. If nothing is done by then I’ll have to start waking up to the fact (with pain in my heart) that Q is controlled opposition. I hate doing that because it’s admitting I’ve been deceived AGAIN. A tough pill to swallow. It doesn’t mean my political leanings or integrity changed, if anything, I feel way more motivated to fight back with everything I’ve got.

It’s all for nothing if you don’t have freedom

I made this announcement on my Louder Than Love Facebook page at the beginning of this month. I’m one of those dudes red-pilled by 9/11, as a result, I made Bush and the republican party my main target. That made me believe in “CHANGE”, so yeah Obama fooled my ass. You see, I was a liberal, a common expectation for a 20-year-old “alternative rocker”. Not much room for conservatives in that wave.

Remember the old saying? “A man who has not been a socialist before 25 has no heart. If he remains one after 25 he has no head”. So yeah, that was me and I bet a lot of you had similar inclinations. Well-intended idealism, impossible in practice; naive under our current predicaments. As a full-blown libertarian, I believe individual freedoms are NON NEGOTIABLE and are the cornerstones of democracy. Any government limiting your liberty even by a tiny bit is not democratic but autocratic. They may give you some freedoms as bait and switch but it’s either TOTAL freedom or not at all.

I believe in the 1st and 2nd amendments with all my heart. Being the victim of theft and intellectual property due to liberal censorship I’m indeed WAY MORE inclined to the right than the left, politically speaking. Patreon, Twitter, Facebook, YouTube, and PayPal, all have demonized my work; all companies ruled by liberal communist technocrats. One of the most despicable group of people I’ve ever laid eyes upon.

The wolves are guarding the hen-house

A man like Trump, who calls the mainstream “fake news” of course is going to resonate with me. I couldn’t care less about political correctness, especially since freedom of speech is now being limited by it. Last time I checked political correctness is not in any constitution. Him trolling the Clintons? CNN? Jim Acosta? LOVE IT. Denouncing Jeffrey Epstein back in 2009? Being the president with the most impressive record fighting human trafficking? YEAH, THAT’S GRAVY. Making peace with North Korea? Russia? What’s not to like?

But you see, I DID PROMISE MYSELF TO NEVER BE FOOLED AGAIN, not by a politician or a billionaire. Not by a woman or a friend. In the end, I owe myself to FAMILY and my well being, mental, physical, and spiritual. I want Q and the plan to deliver WITH ALL MY HEART but I cannot say I’m 100% sure things will pan out, not even 70%. As a former risk management agent, I’m an “odds guy”, 50% is not good enough for me and never will be.

I only bet when the odds favor me and I’m sorry to say but the odds are not favoring Q right now. You can trust Trump all you want but it seems the bad folks are winning. Look what happened to Joe M this month on Twitter! Look what happened to me this year! Where is this justice we all long for? Certainly not here on Facebook. Things are not moving guys, YouTube is still censoring the shit out of people and so is Facebook (even worst now).

What better time for arrests than this lockdown?

As I see these animals lead the corona scam clown show: Anthony Fauci, Deborah Birx, Bill Gates – I gotta wonder, the evidence these people are involved in the conspiracy to create this pandemic hoax is out there for all the world to see and yet, nothing happens. People losing their jobs, losing their minds over a 0.50% mortality rate mild flu. How many are going to kill themselves out of desperation? How many will become criminals as an alternative to unemployment? Gates and Fauci are pussies.

They would SING in prison, a product of that dozens of high profile arrests would happen overnight IF there was justice. But how can these people shut down the world’s economy, be complicit in a conspiracy to genocide billions of people and be free right now? It’s disgusting. REMEMBER! QUESTION EVERYTHING!!!! Q warned you so! If you don’t, you are not taking all the information as crucial, you are cherry-picking what supports your CONFIRMATION BIAS. I believe most of the info Q has released is invaluable and legit but it could then again, the bait and switch serve a purpose.

Keep patriots in line, waiting. Make them lose crucial time as 5G rolls out. Microchips blend in. Freedom gets raped. I shouldn’t be telling you this, you should be telling this to yourself! After decades of every man in power in the US lying to people except Abraham Lincoln and John F. Kennedy (both murdered), you have no doubts? DANGEROUS AND RECKLESS, WHY? What if nothing happens in 2 months? How much more time will you sit idle for the arrests to happen? 1 year? 2 years? A decade?

Say no to false idols please…

Will you act once 80% of the population is microchiped by Gates and 100% of suburbia is controlled by 5G + Dystopian surveillance + facial recognition, digital certificates & social credit? Have we learned nothing? Blind faith is for GOD, not Q. Microchips = Mark of the beast! Stop equating God to Trump or Q, that’s blasphemous. There’s only ONE GOD above us all. Is Trump a warrior of God? Maybe, I hope so.

But until we are 100% sure you need to stop worshiping the man like he is the 2nd coming. False idols are ANYONE but God don’t you realize? Why are you making an exception here? Some will call me a LARP, a traitor, a cry baby. Others will discredit my work by giving my humble opinion on how to support it and not sink like the Titanic if it’s all for show. My goal is to enforce critical thinking and BE PREPARED FOR THE WORST AT ALL TIMES. Plan B, Plan C; we should worry about those. If you trust the plan so much STOP following and start making your own.

Don’t worry about what others are doing WORRY ABOUT WHAT ARE YOU GOING TO DO WHEN THEY COME FOR YOU! I love GOD AND FREEDOM, I like Trump but there’s a big difference between liking and loving. It worries me some people in the movement don’t have their priorities straight. ENJOY THE SHOW? While children get kidnapped, sodomized, and sacrificed by the thousands a year? Sorry, I can’t enjoy it as I meet new abuse survivors every week. My plan of action? 100% CIVIL DISOBEDIENCE, REBELLION.

“HOPE FOR THE BEST, PREPARE FOR THE WORST”

If no actions come out of April I’m officially off the Trump bandwagon and back into the “fuck the bipartisan system” bucket. Destroy the system before it destroys you or at least die trying. Sadly, I will probably die or be arrested and charged as a terrorist or dissident by the time some of you decide to fight back and drop the “wait for the plan”. I’ll die with my boots on, on my feet. Not on my knees mumbling “trust the plan”.

We want the same things, ABOLISH human trafficking, DESTROY pedophilia, NUKE Hollywood, DRAIN THE SWAMP. But how long we’ll we wait? Maybe God wants us to fight back! EARN OUR FREEDOM BACK. Not trust a man, not anoint false idols. I won’t leave my FREEDOM to God much less to Q. I like General Flynn but WE need a sign. It’s been 3 years. The 1st big arrest was announced months ago and nothing happened.

You can hate this all you want but when I get executed or sentenced to life in prison, remember I fought for your freedom and your children. Remember I begged you to listen and prepare, NOT sit idle. I’m already looking for recruits locally, trained militia, guerrilla warfare. We won’t allow one 5G tower to be erected in this free land. Much less if it’s branded by Huawei as my country seems to be inclined towards. I have already pictured myself going out in a blaze of fire, fighting for freedom, and it feels good. Dying is easy, quick. Living is as a slave? Not for me.