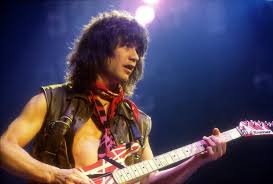 I have to recognize Eddie Van Halen and his unique technique changed guitar playing forever. Honestly, not a Van Halen fan, can’t think of one of their records I listen to often. His amazing catalog gave lots to rock-n-roll music, particularly. Vivid memories of learning how to play the amazing solo in “Panama,” while on a business trip to (*drumrolls*) Panama. Back then, business was playing poker, mostly online, as I made my living off of that before the DOJ shut down the party in 2011. Cheaters developed crazy artificial intelligence bots that beat humans who are good players, not profitable to exploit now.

I mean, I really prefer my rock-n-roll without the spandex or the over-glamorized antics. But if there’s a killer guitar solo in music, it’s Panama’s. Funny story about one of my former bosses when I used to work for mafia-owned gambling companies. These places are linked to Las Vegas and the NY/NJ Cossa Nostra, located offshore. He used to call me “Van Halen” because I wore leather and had long hair. Imagine some dude that looks like Paulie Walnuts from the Sopranos sending you outside to fetch his lunch. “Hey! Van Halen, please go get my meal and keep the change, HAHA.”

I didn’t particularly fancy the nickname but today I remember it with a bit of melancholy. Everything changes. Now before someone’s imagination goes wild: No. I didn’t get send to throw people out of bridges or bust their kneecaps. Mafia’s legality in gambling has really solidified as they have bought many in government. I got hired because I spoke English and have solid math skills. I was a risk manager who sat 8-14hours a day (extras after 8hours paid 2x) moving numbers on a computer screen. Mainly, I supervised the distribution of millions of dollars in action. Is like working for a bank, legal criminals.

Not my place to judge

Before I was a fan of the truth, I was a fan of rock-n-roll, which is a genre of mixed truths I guess. You can find a lot of bullshit musicians, who are not only whores for fame but of course, kid diddlers or worst. At the same time, some of the most amazing humans, are also musicians. Music has a way to connect with the outcasts, the tortured, the outspoken, the different. It often attracts the revolutionaries, the working man, the housewife, the executive woman, the CEOs.

If there’s something most humans have in common is the love for music. Whatever the genre or the style, music vanishes boundaries and languages. My social media will avoid posting about COVID-19 or the Q movement. I will post more about human trafficking, but also music – Going back to our roots, more Chris Cornell stuff. I will have the other crap here, where I have total freedom and control. Gotta be smarter than “them.” This week Facebook shut down my personal profile and the private discussion group. The bans are directly linked to mentioning those two subjects FYI.

Now, I don’t know if Eddie was involved in anything shady. If he was, F-him, but I’m not one to throw blind accusations just cause someone “made it.” I’d rather try and leave judgment to God in those cases where I haven’t seen any evidence. I only know his love for guitars was as honest as honest love can be, and I admire that. I wish I loved mine as he did his. If you have nothing nice to say and without evidence, why be a cunt? Rest in peace Eddie Van Halen.