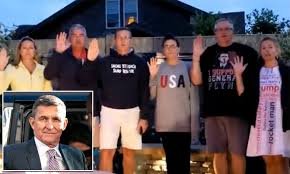 What a month, an unbelievable 30-day period in which we had Clinton served, Obamagate subpoenas and the HUGE arrest of Ghislaine Maxwell. Now we have confirmation Q is real and a military intelligence operation by General Flynn. It’s not some random LARP. I never believed charlatans out there saying Q was just a LARP. Its either military intelligence or a military psychological operation aimed at making those rebellious against the NWO, docile.

If you don’t know who Michael General Flynn is, you need to do your research, but here’s a start! He is a 3-star Lieutenant General and served in the United States Army from 1981 to 2014. In 2012 U.S. President Barack Obama nominated Flynn to serve as director of the U.S. Defense Intelligence Agency, a post that Flynn held until 2014. Flynn was later selected by U.S. President Donald Trump to be a national security adviser of the United States. Flynn assumed that role in January 2017 but resigned February 13th, thanks to what is now known as “Obamagate.”

Born and raised in Rhode Island, General Flynn received degrees from the University of Rhode Island, Golden Gate University. He also graduated from the U.S. Army Command and General Staff College at Fort Leavenworth, Kansas, and the Naval War College in Newport, Rhode Island. Flynn registered as a Democrat but said that the Democratic Party changed significantly since his childhood. He played football in his youth and worked as a lifeguard in his home state of Rhode Island. Military accolades: