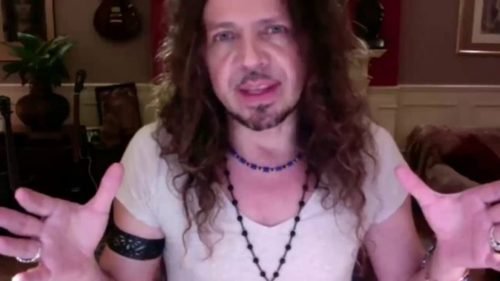 FREE Podcast available HERE. In the previous article, I showed you the origins and the new age ideology of fake guru Sacha Stone. An ideology he bases in the occult, mainly Luciferianism and Agenda 2030 inspired communism. His words act as a spell for many who listen to him on the regular, hard truths mixed with bold lies and scams. Take out the flowery words from Sacha, and what’s left? It seems he talks a lot about nothing, never really naming names or facts. The ploy to distract using $10 words is an old tactic to deflect away from his darkness.

Sacha’s mother was an easy find after all, as daughter and mother came in attacking from different fronts. Gail Adams on Facebook and Toin Adams on Instagram. “If you attack my brother, you attack me!” As expected, they both deny any accusations against Sacha. I don’t fault them over it, and neither should you, family first. They claim Sacha’s father is: Anthony James Adams, “a presenter for Anglia TV.” I’m open to corrections, and so I asked them to send me a copy of the birth certificate. That way, I can change the article because guess what? I don’t trust these people.

Others close to Sacha Stone but not part of his twisted family have confirmed the fact Sir Walter is the dad. Until I see official documents proving otherwise, the article remains as is. Besides ad hominem attacks and assumptions about my character, I can’t say I got much from these exchanges. They seem to be prone to question others “light and grace,” I find the wording interesting. Especially considering how much Toin enjoys sculpting Lucifer.

Enough with the Adams family, let’s take a look at the claims of fraud against Sacha. Peter Shelton, who lives across the street from Akasha, otherwise known as the “New Earth Haven,” denounces Sacha Stone of stealing $90,000. A loan that Sacha should’ve paid in two months prolonged for over three years. The terrible experience didn’t end there, as Peter and his wife became a target of Sacha’s cronies. “How dare you, asking for your money back, sir?” Just like they did to me. “How dare you, to give a voice to an abuse victim, sir? Projection.

How about Monica Doe? A woman who loaned Sacha $100,000 – Her total life savings, as she told me. Another life ruined by Sacha’s fraudulent ways, using his seductive manipulation to make the other person feel comfortable. Sacha was supposed to pay back this loan as soon as the “QT-Pi Technology” paid off, which of course, never did. In the screenshots below, you see him boasting about never having anything to do with the technology, and yet he defrauded Monica Doe using it as leverage.

That’s the common denominator – Sacha asks for $50,000-$200,000 loans that he’s supposed to pay off short-term. He never pays back, but most importantly, he never intends to. Monica Doe knows of another person defrauded for £80,000, and I know of another Bali resident whose $200,000 vanished. That’s a total of $441,013 roughly, assuming he paid half to Monica Doe, which should be $50,000. And what about all the pocketed donations that never delivered the promised events or projects? It’s a MILLIONAIRE SCAM. Not to even mention the giving folks who just give him the funds no strings attached.

I think those testimonies alone should be reason enough to distrust the man, but what do I know? I said above Sacha bases his new age ideology on NWO-driven communism, so let me back that up. Everything Sacha earns via Humanitad, New Earth, or The ITNJ goes back to the New Earth Trust. You may read it for yourself in their own words. “The NewEarth Project is an open platform to unite humanity in ushering in a new era of planetary wellbeing, peace, and prosperity.”

Trusts are handy because you can use it as the “owner” of property or company and keep yourself safe from unpleasant legal entanglements. They’re a great way to handle assets with total privacy and immunity if you know what you’re doing. After what you already know about Sacha, what does logic tell you? I suggest you at least stop with the worship and don’t give this man your money or hope! The so-called New Earth Trust claims property over:

“Membership is open to all: You can become a member of the New Earth Nation by ratifying the New Earth Treaty.” Who is enforcing this treaty? The ITNJ and the fake judge? There is a “blueprint” posted on the New Earth Project website containing several references to the United Nations, one being UNEP – Big into climate change. Agenda 2030 rears its ugly head with Sacha’s initiatives, as they go hand in hand. Not by chance, Sacha started his journey at the United Nations.

Sacha and the occult

As if stealing funds and landmass UN-style wasn’t enough, guess we can always refer you to the symbolism. The Phoenix symbol present in Egyptian culture and Freemasonry, used for a botched award show, is a tiny example. Let’s start with the pinecone present in their logo. The pinecone refers to the pineal gland, the third-eye, a symbol of human enlightenment if you will. However, the pinecone is also a pagan fertility symbol, associated with the child-sacrifice god Baal and the cult of the goddess Cybele.

Project Artichoke was a C.I.A. program precursor of Project MK-Ultra, a form of mind control through hypnosis, drugs, sleep deprivation, and torture. Many Satanic Ritual Abuse survivors are victims of MK-Ultra techniques. According to Sacha, he wants to recuperate these occult symbols and bring them to the light, or some bullshit. HERE his excuses for this and many other things. The pinecone is a prominent symbol in Vatican City, where a statue sits on “Cortile della Pigna.” The armored roof of “Archivio Segreto Vaticano”, contains the archives, where all of the Vatican’s secrets and treasures are stored. Proper?

The gatekeepers of the Vatican

The pinecone symbolizes the church’s hijack of humanity’s enlightenment and replacement with religious surrogate dogmas. The facing peacocks act as the guardians of the Vatican’s secrets. Why would the ITNJ use symbolism that refers to the exact location of the protected secrets of the Vatican? Sarcasm? Unless they represent their interests, it doesn’t make sense. More like hidden in plain sight. Please visit Ella Ster’s website, a great researcher who took my testimony and found more things as we collaborated. Sacha is essentially a Dionysus/Bacchus worshiper, a pagan guru like many before him.

The ancient Greek god of wine, fertility, ritual madness, theater, and religious ecstasy. Is Sacha Stone another bad actor? And yet, the “all-seeing eye” is shown on Sacha’s website promoting his brand. When you place the Humanitad logo next to the Jesuit logo, you see a strong resemblance. Especially with the H in the center of the sun. Does the H refer to Humanitad or the Holy See? The ITNJ is the legal branch of the umbrella organization Humanitad, after all.

Who is Ciro Orsini, the man hiding behind the curtain, pulling the ITNJ strings? Any Jesuit links there? The sun in the Jesuit logo is a nod to the emblem of the Order of the Black Sun. According to Sacha, he is the sole creator and owner of all the logos and symbols representing his assets. Questioning his motives as he uses trigger-happy symbols that may affect survivors negatively is only fair. The ITNJ treaty signed in blood for dramatic effects only, or is there more to it?

The number of red flags with this guy should be more than enough at this point, public death threats and all. Yes, he is known to get crazy online, threaten women with beheading them (even if it’s figuratively) when confronted with his scams. Or he can also brag about sleeping with “hundreds of women” when going ad hominem at some troll while representing the ITNJ. This behavior is not acceptable for the so-called new age guru many have come to accept, albeit blindly.

Testimonies of abuse towards women and girls (even underage) populate the web. These women are offered “no strings attached shelter,” just to find themselves sexually pursued 24/7. Many of the women who send me their stories wanted nothing more with him and his troll army. Yes, Sacha is known to aim several people to stalk you online if you discredit him, and my supporters suffered so. So when he was not abusing women like Jessica Schaub, I guess it was because he was going for younger. You can read Jessica’s memoir HERE.