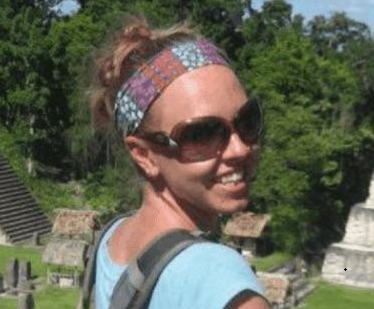 Monica Petersen was a notorious activist and humanitarian who focused on human trafficking. I could try to describe her but would fail miserably compared to the beautiful eulogy her family wrote her. Monica was born in Ames, Iowa, 1984 to Michael and Marcia Petersen. Monica earned her bachelor’s degree in Anthropology from Western State College of Colorado in Gunnison, Colorado, in 2008.

Following her success, Monica got appointed to the Data and Research Task Force of the Governor’s Colorado Human Trafficking Council. She was a scholar-activist committed to improving the plight of the oppressed with a clear and critical voice in the human trafficking field. She was courageous and gave selflessly of her time and energy. Monica was An underrated hero and an example for youngsters looking to make a difference.

After leaving her position at the Korbel School, she moved to Haiti in September 2016 to teach and set up an NGO. At the time of her death, she was teaching Social Sciences at the Union School in Port-au-Prince, Haiti. Always helping the most vulnerable while traveling in less than ideal conditions, this is the story of Monica Petersen…

Monica Petersen dedicated her life to volunteering and researching. Her travels included: Belize, Bolivia, Botswana, Costa Rica, Ecuador, Guatemala, India, Mexico, Nepal, Peru, Puerto Rico, South Africa, Tibet, and a trip through seven European countries with her family. Monica Petersen worked as a nanny while in graduate school and was a mentor for a Congolese family for six years. She had an exceptional way with children and people overall.

Sadly, her drive exposing the corruption in Haiti put her in harm’s way. She was found dead by hanging, and her death ruled a suicide. As the Pizzagate frenzy roared online, researchers on Reddit and VOAT quickly linked her death to the Clintons. She was in Haiti after all, the base of operations for the financial and humanitarian crimes committed by the Clinton Global Initiative. Ever since I learned about Monica, I vouched to go the extra mile and leave no stones unturned.

Unfortunately, her friends and family got the news via phone or social media. The night of November 13th, 2016, will forever live in infamy, a brave soul silenced too soon. It is necessary to start with the most reliable facts, the family witness that bravely decided to come forward. Basing the story on four different perspectives: Jesse, Adam, Karen, and Tony; all of these people were close to Monica and asked for their privacy to be respected. Their names exchanged for aliases.

I can assure you these people are the real deal, vetted links with Monica and her work. With Jesse, it wasn’t necessary, of course, being a family member. I could’ve gone further, but the risk in Haiti is too much to ignore. Some folks offered to take me to “the man who knows everything.” – I declined.

1) Monica’s sister received a text message from Monica time-stamped for the day after Monica’s death. On top of that, written with poor grammar which, just isn’t something Petersen’s do. It was supposed to be a sorry note, but there’s just no way the last message she sent to her sister would be in poor grammar. Also sent a day after Monica died.

2) To my knowledge, the family has still never received an official autopsy report. Haiti took several weeks to deliver the body, and it was so full of embalming fluid that no autopsy was possible once it got to America.

Not suicide, no chance

The interview will continue during Part II. Jesse needed a few days to clear his head to continue. I admire his courage and his human quality. He is a smart, sensitive guy trying to please family, all while bringing the truth out. This crime will not go unpunished.

Honestly, I was surprised nobody was able to talk to the Petersen family. People doing lazy work and clearly biased in highlighting the Clinton connection above all, in my opinion. I’m not happy with that version alone, I need to bring closure to Monica’s story. I’m shocked we never heard about Mike Williams, the boyfriend, either. I always identified with her for reasons that are unknown to me but I feel her death is a total waste. Regardless, her work is valuable to the world and she was meant for bigger things that would benefit children.

I wanted to publish Jesse’s testimony first because is the most informed and credible. You can compare other testimonies with this one and discern disinformation. I think one of the witnesses is pushing a narrative and I’ll make sure to note why I think that in the next deliveries. I sent Jesse my personal analysis of who Monica was and what happened. Luckily, he was happy and agreed with every major item in my research.

Monica Petersen is a modern-day hero who many people will never come to know. Her light was shut down too soon and her story was buried by disgusting animals who only care about money. She wasn’t famous or flashy like others who also lost their lives exposing this filth. A brave, smart, witty, caring, and daring woman, her good nature would ultimately cost her. She was trusting and saw the good in people, which exposed her to seedy characters like Mike and friends.