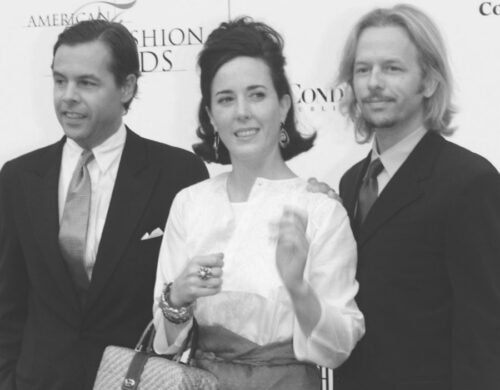 This article is the 2nd part of Kate Spade I. Reta Saffo spoke with several media outlets about Kate’s suspected bipolar disorder. She also alleged that the deceased fashion designer was obsessed with suicide following the death of actor Robin Williams. Earl Brosnahan further discredited Saffo’s statements by saying: “she’s estranged from the family for over ten years now.” After Kate’s brother set the record straight, the distant sister and her son denounced threats made by the Spade/Brosnahan families.

“A public example could equally be made of your private missteps. Be very mindful of what you say.” Saffo says she received a text from her brother, Earl Brosnahan, telling her to keep her mouth shut. “I have been threatened by text messages from my estranged family today for having spoken out – for speaking the truth.” Her son Laith wasn’t surprised by his family’s reaction. “My aunts and uncles, even Andy and David, are trying to do a cover-up, acting as if she wasn’t ill. They were worried about how it could affect the brand.

We are reeling from the loss of such an amazing woman. It did NOT have to happen! She desperately needed help, and my mother and I flew out to her summer home in Napa a couple of years ago to get her into treatment. We came so close to getting her the help she needed, too, but ultimately we failed. I grieve for my dear sweet cousin Bea but not for my Uncle Andy. He only cared about her and his image!!!” Sounds like a nice, friendly family!

TMZ claimed they learned though a police source that Andy and Kate Spade were divorcing, but Andy denies it. Is he playing it off to save appearances or because of something sinister? Just look at some of his Instagram images, especially those of their daughter. In 2016, Kate told People magazine how the couple survived while working together. “Treat them as well as you would any other employee. What I mean is we need to respect one another as much as you do the other people in the office. I’ve had to learn to be as respectful.”

“We have different personalities. He’s more relaxed, more of a risk-taker, I’m a little more detailed and uptight neurotic.” That same year, Kate Spade spoke about how even though she had returned to the world of fashion, her daughter was still her priority. “I kind of thought taking that time off was unbelievably amazing,” she said of her decade-long absence. “I thought it was, like, a gift – I really did.” Once back at work, it was including her only child that made work a delight for Kate, and she described her excitement at getting to go to the studio with Frances on the weekends.

Kate is the third big-time designer to pass away, along with L’Wren Scott (2014) and Alexander McQueen (2010). All found hanging from a doorknob by a red scarf. Kate’s father, Frank Brosnahan, said they spoke the night before her death. “She’d been taking some pills, which I advised not to take. I don’t know what happened. The last I talked with her, the night before last, she was happy planning a trip to California to look at colleges. She doted on her daughter.” Frank died two weeks after Kate.

Calling a Spade, a spade

David Spade is very involved in the worst of Hollywood, a fact he confirmed when the COVID-19 plandemic started. He, Ellen Degeneres, and Chester Hanks shared public freakouts over the disappearance of Tom Hanks. Hanks and his wife Rita Wilson (Toni Cornell’s godmother) got ill with COVID-19 (doubtful) around the time and were isolated. Many believe Hanks is pegged by the US military, in witness protection, or even executed. Of course, its all speculation for now due to strange happenings involving his social media and general appearances.

On March 18 David published: “I mean, this all rides on Tom Hanks. Let’s be honest, Tom Hanks, national treasure. I love him, we did SNL together, he’s a fuckin stud. But he’s down in Australia like Quentin Quarantino, and I don’t like the fact that he’s not in the box. Forget Will Smith, let’s get Tom Hanks in the clear box and watch him. Because if Tom Hanks pulls through, we are gonna be so stoked. It’s all riding on Tom Hanks, you guys. If anything happens to Tom Hanks, fuck, that shit’s over, dude. I’m just gonna be like, ch ch, on my roof! (Gesture – loads shotgun – looking around) – Bye!”

On March 20, David published another coded message directed at the Hollywood Cabal. “It’s Friday, guys! I’d love an update on Tom Hanks. I don’t mean hourly, I mean minutely, I mean, it’s literally like huge chunks of time. I wanna know what’s happening, where’s Rita? What are you doing? Are you having fun? Tom Hanks is tough, and I think if he pulls through, I’m gonna breathe a sigh of relief, and I think he will. He’s my boy.” In the video, you can see a notebook that reads: “Talk to us, Tom Hanks.”

The nicest pedophile in Hollywood

The most effective sociopaths in our society tend to fool everyone by portraying the opposite, Tom Hanks included. He’s been playing the game for so long most people squeal in disbelief when they hear he’s a pedophile. Thanks to brave Isaac Kappy and Sarah Ruth Ashcraft, Hanks has been exposed for a while, a rude awakening if you will. The Hollywood whistleblower spent his days denouncing the likes of Hanks and Steven Spielberg until the day of his murder. Isaac was thrown out of the Transwestern Road bridge and onto I-40 on May 13, 2019 (near Flagstaff, Arizona).

Before Isaac’s murder, Hanks implied previous knowledge of the tragedy. He signaled the death on social media with a post on Route 66, a crushed bottle cap in the dirt with a P drawn on it. Cap+p = Kappy. In that post, Hanks noted “Historic Route 66. Roadkill? I hope not. Hanx.” That tweet itself contains 39 characters, and Isaac died 39 days later. Freemasonic coding. Numeral balance, Thelema. Coincidence? Another post by Hanks hints at Isaac’s role in Breaking Bad – He covered the green handkerchief with a red handkerchief of his own. A coded duel challenge, a threat.

A woman named Sarah Ruth Ashcraft came out in 2018, denouncing Hanks as a pedophile trafficker. She claims her dad sold her to the actor as a sex slave when she was just 13 years old. The actor’s children are not shy about their links to Freemasonry, witchcraft, and the infamous Illuminati. If you observe the actor’s social media, it’s certainly suspicious. Single-item pieces of missing clothing and accessories strewn about on sidewalks, parking lots, deserted roads, etc. Disturbingly, many of these items belong to children, coded bragging about his victims, perhaps?

What was Kate’s role?

People like to mention how Kate Spade was also a trafficker, involved in SRA. Some harshly call her “the shoemaker,” hinting her involvement in the “red shoes” craft. Red shoes are worn by pedophiles (and every Catholic pope) as a “Luciferian fashion statement,” they’re made of human leather, children’s skin. It’s understandable why some think that, but I disagree. Yes, occult symbolism was used by her brand but don’t forget Andy was as involved as Kate was. The same voices tend to say Anthony Bourdain was a cannibal cook and also a Luciferian. Nonsense! If they were, they would be alive.

“The NYCC has been one of the causes I have been most devoted to. The center has consistently provided an unmatched level of expertise, care, and comfort to so many children and families that have gone through abuse crises in New York City. We personally get involved with the team, the children, and families. The dedication shown by all has been inspiring to us.” Kate Spade stated in her welcome toast while hosting the NYCC’s 18th annual fall event at her home. Whatever you want to believe is up to you, but I don’t fancy people talking ill of these murdered people.

“The Clinton Foundation’s “Haiti initiative” led a delegation that included representatives from West Elm, Kate Spade, Holt Renfrew, Kenneth Cole, and others. On an artisan, fashion, and manufacturing trip in the Port-au-Prince area to introduce them to potential investment and sourcing opportunities, and to develop new partnerships with Haitian business owners. As a result, four new partnerships were formed between international retailers and several Haitian artisan businesses they met during the visit.” If David’s involvement with Tom Hanks wasn’t bad enough, there’s always the Clintons to seal the deal.

The recent death of Naya Rivera (who dated David Spade) at 33 years old (Masonic numerology) is worth mentioning. The actress, known for her role in Glee, “accidentally” drowned on July 8. Her co-star Mark Salling was found hanging on January 30, 2017, after his arrest over the child pornography possession. He agreed to a plea deal before his death and was delivering those who sold him the 50,000+ illegal file collection. Kate Spade’s net worth was estimated to be around $150 million at the time she died. Qui bono? Her husband and business partner Andy Spade, and her Frances Valentine partner, Elyce Arons.