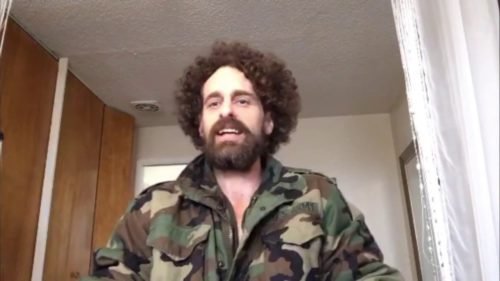 Continuing where we left off during PART III. Isaac was surrounded by fake friends trying to gather intel on him, including infamous YouTubers. Manuel Chavez III (aka Defango), Arturo Tafoyovsky (aka Lestat), and Eddie Gutierrez (aka Unirock), known LARPs who dedicate their meaningless lives to discredit researchers and abuse survivors. They tried their best to entrap Isaac and also muddy the waters of the investigation after he died.

These folks are notorious for making a mockery out of the subjects they cover, discrediting conspiracy theories especially. They serve one purpose and one purpose only, act as court jesters. Lestat himself admitted having intercourse with a minor, Defango has taped himself blackmailing and threatening -people. Is mindboggling how these people are not behind bars.

Who bankrolls them? Who sets their targets? None other than Gabe Hoffman. The evidence is everywhere, as one of Hoffman’s targets I can attest to Manuel Chavez’s stalking and gaslighting. One hour videos dragging my name through the mud plus hundreds of internet posts targeting me were the norm. Why? Because I exposed Hoffman since day one and I was one of the people who dug deeper into what happened to Isaac, which threatens their ”mission”.

A live-action role-playing game is a form of role-playing game where the participants physically portray their characters. In the context of the truther movement, a LARP is basically an infiltrator or what is known as a gatekeeper. Their objective is to mislead and profit from the movement itself. The sad reality is, there’s no such thing as a “truther movement” as the real researchers are not allowed to bloom and prosper.

Pardon my French but there’s no other way to describe Hoffman’s role in the story. Gabe Hoffman targeted Isaac and his friend “Vegan Mikey” from the beginning. To understand why you have to dissect his associations and involvement in the crime. Hoffman became notorious thanks to his him funding ”An Open Secret”, a documentary film directed by Amy Berg.

The guy doesn’t play well with others, that much is obvious. Bickering and threats against the film’s main witness (Evan Henzi) and Amy herself evidence this. Much like Corey Feldman, Hoffman’s role is to gatekeep the information regarding child abuse in Hollywood all while attacking survivors and researchers. I will eventually republish my exposé on him but for now you need to be aware of his nefarious links. The Clintons, the Podestas, the Bushes, and his next-door neighbor, Al Hoffman Jr form part of the infamous clique.

Hoffman’s links with Black Cube and Mossad are hinted by himself as he openly brags about it. The producer started to gain detractors after he appeared in the Crazy Days & Nights podcast to defend Steven Spielberg. He insists Heather O’Rourke wasn’t abused by the director or anyone else. It’s rumored Heather’s death was provoked by sexual abuse from Tom Hanks, Henry Winkler, and Spielberg.

Why would he defend Spielberg vehemently as he denies any link to the famous director? Two words: MEGA Group. Yes, the financial arm of Mossad in the US founded by Leslie Wexner, the Bronfmans, and Spielberg himself. The group responsible for financing Jeffrey Epstein’s blackmail operations in American soil has also been financing Hoffman and Feldman.

When Isaac came out denouncing Spielberg and Hanks, he became a target immediately. The theory is that Hoffman is in charge of leading the campaign to destroy Isaac’s reputation. He also served as an intermediary to hire LARPs and the hitmen who claimed his life. That way, Spielberg and Hanks stood away from the controversy all while enjoying their revenge. Everyone in Hollywood knows you don’t cross Steven Spielberg.

Hanks’ outing as a pedophile riddled most people but if you observe his social media he’s certainly suspicious. Single-item pieces of missing clothing and accessories strewn about on sidewalks, parking lots, deserted roads, etc. Disturbingly, many of these items belonged to children, it’s fair to assume these items would have been left behind in a struggle or even a kidnapping. Openly bragging about his victims perhaps?

Before Isaac’s murder, Hanks implied previous knowledge of the tragedy. He signaled Isaac’s demise on social media with a post on Route 66, a crushed bottle cap in the dirt with a P edged on it (Cap-P = Kappy). In that post he noted “Historic Route 66. Roadkill? I hope not. Hanx.” Isaac died 39 days after Hanks’ tweet, that tweet contains 39 characters, including punctuation. Masonic balance, Thelema. Coincidence?

Hanks’s also hinted at Isaac’s role in Breaking Bad, he covered the green handkerchief with a red handkerchief of his own, clearly a coded threat. Added to all this, a woman named Sarah Ruth Ashcraft came out in 2018 denouncing Hanks. She claims her dad sold her to the actor as a sex slave when she was just 13 years old. The actor’s offspring is not shy about their links to Freemasonry, witchcraft, and the infamous Illuminati.

Everyone seems to have a price

Another one that became a person of interest due to his erratic behavior is Michael Whelan (aka Vegan Mikey). The SRA survivor who witnessed child sex trafficking at Voodoo Doughnuts in Portland, Oregon seems to be on shaky ground. Not only was he near Isaac’s location when he died but also behaved suspiciously with me and others. Leaving judgment aside over drug use, I want to pinpoint some discrepancies.

As a general rule, I don’t go after SRA survivors, period. UNLESS they are infiltrators that become suspect in a case like Isaac’s. Those researchers who focus on questioning child abuse survivors are usually gatekeepers and are up to no good. My thinking is all lies fall due to their own weight. If any survivor is lying and out for attention or money is not my business, I’m here to focus on the perps and the huge trafficking rings. Outing scammers is not my business but Whelan is a special case.

When Robert “The Deplorable” questioned him, Whelan played dirty. He claimed he had Isaac’s dead man’s switch and wanted to trade it for information on those researching the case. Not money, but the names of those involved in a Telegram research group because ”he was worried” about what was being discussed. Why would he care about that? It makes no sense unless you have a guilty conscience. Why would he lie about such a thing?

Robert baited him into revealing his deceptive ways. Turns out Whelan had an alibi for the day Isaac died but he also confessed he left his mobile at home for the road trip. Who leaves their mobile when taking a long trip like this one? It seems like a ploy to not be tracked by GPS and not having his location match with Isaac’s…

The attempt on Robert & Alessandro’s life

After Isaac passed, I befriended Robert “The Deplorable”, an SRA survivor who cared a lot about Isaac. As we connected the dots we received threats constantly. On Friday May 31st, I received a bribe offer of measly $5000 in Bitcoin to delete all my accusations against Jeffrey Epstein, Harvey Weinstein, and Gabe Hoffman. Funny list of names all linked to Black Cube and Mossad, coincidence?

That night I showed the threat to Robert and he asked me to be careful, 12 hours later he was found on the floor by his uncle. Masked intruders broke into his home and hung him from an electrical cord. Luckily, as they left thinking “mission accomplished” the cord broke saving Robert’s life as his uncle later found him and called the paramedics. As things got dicey I tried my best to carry on with a low profile but Hoffman kept pushing.

I was an admin at the Crazy Days & Nights group, which he didn’t like due to the evidence I gathered. He bribed a fellow admin to have me sacked while he reported me to Facebook, meaning I had no way of contacting anybody. He continued his gangstalking campaign against me for the next months (still to this day) sending his lawyers to shut me down from Patreon, Facebook, and Twitter.

Days before Twitter gave me the ax, on February 16th, 2020 I suffered a break-in/assassination attempt. Two men wearing balaclavas tried to break into my house, I warned them I was armed and they hesitated. Unfortunately, I wasn’t able to gather much else, it all happened in seconds, they boarded a plate less taxi cab and fled. The door was reinforced steel, they wouldn’t have been able to open it but I didn’t feel like waiting and verify. I moved twice since then.

If one thing is prevalent in this case is the number of backstabber “friends”. As I spoke with Fiona Barnett often (who herself had a falling out with Isaac), she warned me of people involved with intelligence. Among them Steven Outtrim, Thomas Schoenberger, and Craig Sawyer. Shortly after I was attacked in unison by Sacha Stone, Robert David Steele, Hoffman, and Sawyer; an orchestrated effort to take me out.

As I’m a threat and a target to many perps, nefarious people try to get close to me. Not only to gather intel on my life but also to feed me disinformation that can be used to discredit me. I befriended Steven and Thomas knowing full well what I was getting into, I must confess I do admire how accurate Steven is on his reporting, especially on Isaac’s case but some things are certainly contradictory.

I wanted to give them the benefit of doubt, Steven especially but I never trusted them. What I learned along the way came with great sacrifice, lost my income and my platforms. As I served as the heading spear to attack Hoffman, Thomas thought he had me under control but I knew better, I figured I could use him while feeding him harmless information to uncover the truth. As for Fiona, I support every SRA survivor but there are things she has said or done that I don’t agree with.

Notice Thomas and Steven spend insane hours in the so-called LARP wars bashing people who are involved in Isaac’s case? That’s their purpose, draw people like me into going head-on against Hoffman and others into a vortex of trolling futility so I can be deplatformed. I cannot prove it but I think Thomas is associated with Michael Aquino (founder of the Temple of Set), the self-proclaimed master of psyops.