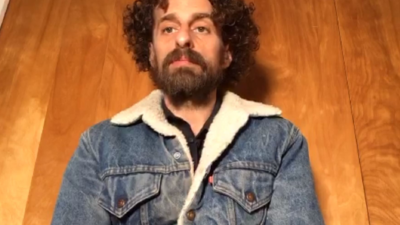 Continuing where we left off during PART I. In their first stream together, Fiona Barnett and Isaac spoke about two Arizona people Fiona outed as FBI informants who worked for the National Guard (Camp Navajo). They also called out Gabe Hoffman, Craig Sawyer, and Richard Branson. Branson’s Necker Island was rented several times for NXIVM events and he hosted Marina Abramovic on at least one occasion. You can check out a video of their interactions together on OOTG 77’s channel.

Eliahi Priest was introduced to Isaac by Manuel Chavez III (aka Defango), a known criminal. Chavez has been an enthusiastic lackey of Gabe Hoffman, a known villain in the “truther” movement. Defango is a low-level LARP* whose main focus is to attack researchers and abuse survivors, some say he is a government informant. Curiously, Defango has been exposed by his own admission to have been hired by “former” CIA spook Robert David Steele.

Steele gained notoriety thanks to his alliance with the MI6/Vatican honeypot ITNJ (International Tribunal for Natural Justice). An interesting connection if we take into account the ITN sabotaged Fiona’s testimony, as exposed by yours truly. The interview was made when my research was in diapers, the evidence I found after the fact is overwhelming. Those new findings will be published soon, in the meanwhile, you can see a teaser on this post.

Priest is just another corrupt occultist; a mid-level freemason desperate to climb up the hierarchy. He believes in child abuse/sacrifice in order to enlighten initiates into their “craft”. He’s no different than the people Isaac was exposing. Priest’s “Contact Zero” alter comes from a cult of the same name whose members have some wild claims. They say they communicate with the Pleiadians, benevolent extraterrestrials who want to initiate children sexually at puberty.

That’s Priest’s version, others who believe in these aliens claim they are here to help us defeat the evil forces dominating the Earth. Contact Zero states: “In puberty’s rites of passage, each gender is instructed by the same gender on sexual initiation”. Are we supposed to believe this guy was Isaac’s “brother”? Sadly, Isaac was duped by Priest, he was too trusting at times, sadly.

Priest also claims to be the Australian Honorary Consulate in Congo and Zimbabwe, as he is a known blood diamond trafficker in the area. This is where Sacha Stone (The ITNJ) spent his childhood, his father was appointed to Rodhesia as an intelligence asset. He paid for Isaac’s flight, befriended him to entrap him with a blood diamond deal in order to get access to SRA survivor Fiona Barnett.

At the last minute, Isaac refused to entrap Fiona. They used him and by bailing at the last minute, he signed his death warrant. Facts: Priest was Sacha Stone’s roommate a long time ago (Stone leads the ITNJ) in England. Given all this, is not farfetched to believe Priest was recommended by Stone to settle the score. After being kicked out by Fiona, Isaac stayed with Mercy Wolf (ITNJ trustee) and close to Stone himself; too many coincidences, right?

Once back in the United States, Isaac made it clear he had a fallout with Fiona and Priest. Conveniently, Priest minimizes the fallout and claims he suffered lots due to the loss of his “brother”. At the same time, he ridiculously claimed Donald Trump and the Q Anon movement were behind the murder. If he didn’t already have huge credibility issues, that sealed the deal for most people.

Gabe Hoffman went unto the offensive against Isaac once again. The hedge-fund manager based in Palm Beach, Florida (much like Jeffrey Epstein was) gained notoriety as the producer of “An Open Secret”. This film exposes Bryan Singer and other low-level pedophiles as part of the swamp terrorizing children in Hollywood. He attacked Isaac on Twitter using both his personal account (@GabeHoff) an the film’s account (@AnOpenSecret) account.

Hoffman claims advocacy for child abuse victims but spends a HUGE amount of time discrediting whistleblowers who come forward. Isaac pointed out Hoffman’s connections I also found later on and was about to blow the lid on the gatekeeper. The producer bragged about getting Isaac deplatformed from Twitter constantly. He has also been stalking me for almost a year, bragging about getting me to shut down from Patreon, Facebook, PayPal, and Twitter.

So far in this 2020, I’m the most censored voice on social media.

During his famous stream, Isaac exposes the “Mossad Media Matrix”, a web of infiltrators hired to divert people from the truth. What truth? Jeffrey Epstein was a Mossad asset used to blackmail important political, financial, and entertainment figures worldwide. Israel denies this. On the stream, Issac focuses on how the most prolific human trafficker in modern history had all these fake abuse victim’s advocates in his pocket as a way to deflect from himself and his associates.

“Forced himself out of a bridge”

Conveniently, since the witnesses were minors their identity wasn’t released; with no names, it’s all hearsay at best. Before his passing, Isaac left a message on Instagram, his only post as all the previous content was erased. Shady, especially if you see the bodycam video released by AZPD of the incident.

According to reports, the road closed from 7:30 am until 11:00 am. This conflicts with Corey Daniels (aka “Phoenix Enigma”) account who allegedly drove through there at 9:30 and saw no incident. Daniels gained notoriety largely in part to his research on Isaac’s death but like many witnessed, he collaborates with some bad actors. More suspicious is the FAKED overpass video he published all while claiming it was included with the AZPD files he got. It turns out I got the same files and the video wasn’t included.

All the traitors begin to show their true colors

From day one Isaac found himself surrounded by “new friends” and it became increasingly more difficult for him to discern who was for real and who was trying to infiltrate him. Isaac’s neighbor, Khayla Bridget O’Connor, shared her story on social media with a lot of details. The way she addressed the tragedy and the fact she equated crying over Isaac to “crying over spilled milk”, instantly made her a person of interest.

Apparently, she saw him every day and didn’t think he did any drugs other than marihuana, alcohol, and cigarettes. The toxicology report confirmed this as no other substances were found. Kayla claimed she saw a suspicious black car staking out their place around 9:00 pm on Friday 10th. Isaac came back home Saturday and “disappeared in a hurry”. She showed three places in Isaac’s apartment where it looks like someone punched the wall, possibly signs of a struggle or intimidation.

He left his computer behind but took his iPad, and sadly since Khayla was the person to peruse Isaac’s computer the version he didn’t leave any notes cannot be trusted. From his bank statements, it shows he came home Saturday 11th when he allegedly gave away a bunch of his possessions. When he went to Australia he did the same thing, so it’s not necessarily a sign that he was planning on killing himself. He left California to Williams, Arizona (350 miles); then headed to Bellemont (23 miles) and then Bellemont to Kingsman (126 miles). His last transaction: made on Sunday 12th, check-in to the Days Inn Bellemont.

A live-action role-playing game is a form of role-playing game where the participants physically portray their characters. In the context of the truther movement, a LARP is basically an infiltrator or what is known as a gatekeeper. Their objective is to mislead and profit from the movement itself. The sad reality is, there’s no such thing as a “truther movement” as the real researchers are not allowed to bloom and prosper.