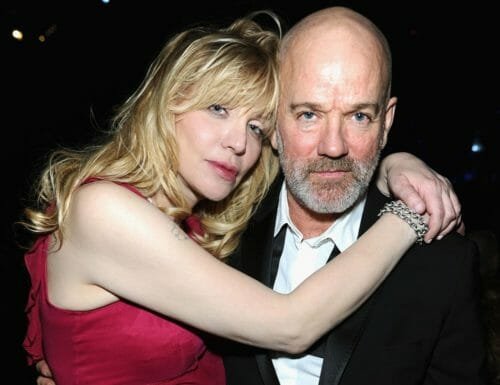 This 80’s “college rock” band was still enjoying newfound success during the ’90s thanks to their prowess, but also thanks to their A-List singer making the right connections. New fans kept coming to the shows, and even underage fans as the restroom lurker rejoiced. Even if he wasn’t signed to this record label mogul (he signed with the competition), they always remained cordial, and some will even say “buddy buddies”. The mogul is probably one of the most feared billionaires in the industry, and they have very similar sexual inclinations.

The singer was instrumental in the mogul signing this HUGE band just before they broke big. He insisted they were huge, and he wasn’t wrong, and the mogul made loads of money thanks to this decision. The singer is the godfather of the first and only daughter the permanent A+ rock star had before he was killed in very mysterious circumstances. Many blame the black widow as the main schemer, yes she was instrumental, but then again, the cult needs to approve a hit of such financial consequences.

This American band was touring across the pond in a country where consent laws are way more lenient, and our permanent A-list singer has always liked that; it gives him more room to “maneuver”. He prefers “No Alcohol” venues so kids from any age can attend his shows, many see this as “cool”. How kind! He allows even those pesky teenagers the chance to see his band perform (not).

The singer preys on underage fans and that has become an awkward problem for his bandmates. He hangs around the restrooms, chatting up the ones he likes, and will get flirty at the minimum sign of openness. He has been out of the closet for a while, but few people know about his illegal disgusting preferences. Some in his inner circle know. Others started to notice as it got to the point where it could become a real problem. The situation is said to have been one of the main reasons they decided to take a break.

The band dissolved and has not been touring for almost a decade, and our singer has found a safer way to keep his preference very well supplied. It turns out, the mother of his goddaughter, the black widow that many blame for the permanent A+ rock star’s murder. She has been supplying this billionaire hedge fund manager with drugs for his clients/victims and even new clients for his island escapades.

The A-list singer met the billionaire at his New Mexico ranch first, and he got convinced he could get what he wanted at his “sex island”. While there, he even formed a very lasting loving friendship with a Serbian-born artist who many consider a witch, involved in very nefarious activities with politicians and other A-listers. Ever since the billionaire’s scandal became public, they have been trying to scatter and carry on with a lower profile than usual; but once the dust settles, it will be business as usual, or so they think.