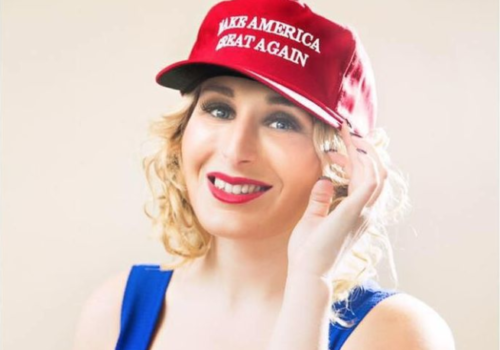 This week is time to expose a fake conservative “activist”, more notorious for her bad behavior instead of her achievements. Larry the provocateur. You wouldn’t know who she is unless you are very active on social media or you live in Florida. She’s registered to run in the 2020 primaries to become the Republican candidate for a seat in the House of Representatives for Florida District 21.

She began “the Canadian Breitbart” and a whistleblower project who exposes the mainstream media. Occult symbolism and rituals evidenced in her social media help telling the story. There’s not much truth in what she says does or does, which is why her candidacy is a threat. She’s a Mossad agent and a fake “MAGA” activist, looking to infiltrate the U.S. media and the government. She is known as a provocateur of sorts, thanks to her known public racy behavior while intoxicated.

She has no qualms about hitting on married men on camera, even if she’s aware cameras are rolling. What the “Proud Boy” didn’t know when he rejected her advances is that she is, in reality, a man. Her original name, Larry. Dodgy affiliations, hidden past, poor judgment, racy behavior, and strange political strategy. She has wasted lots of funds during her campaign, and she doesn’t seem interested in winning.

Some folks working for her suspect her candidacy is another cheap publicity stunt. “Her main interest seems to be going back to social media”. Her main advisor resigned frustrated by her lack of compromise and dedication. To make matters worst, her poor judgment is always manifested, as she sleeps with a woman who works for her campaign.